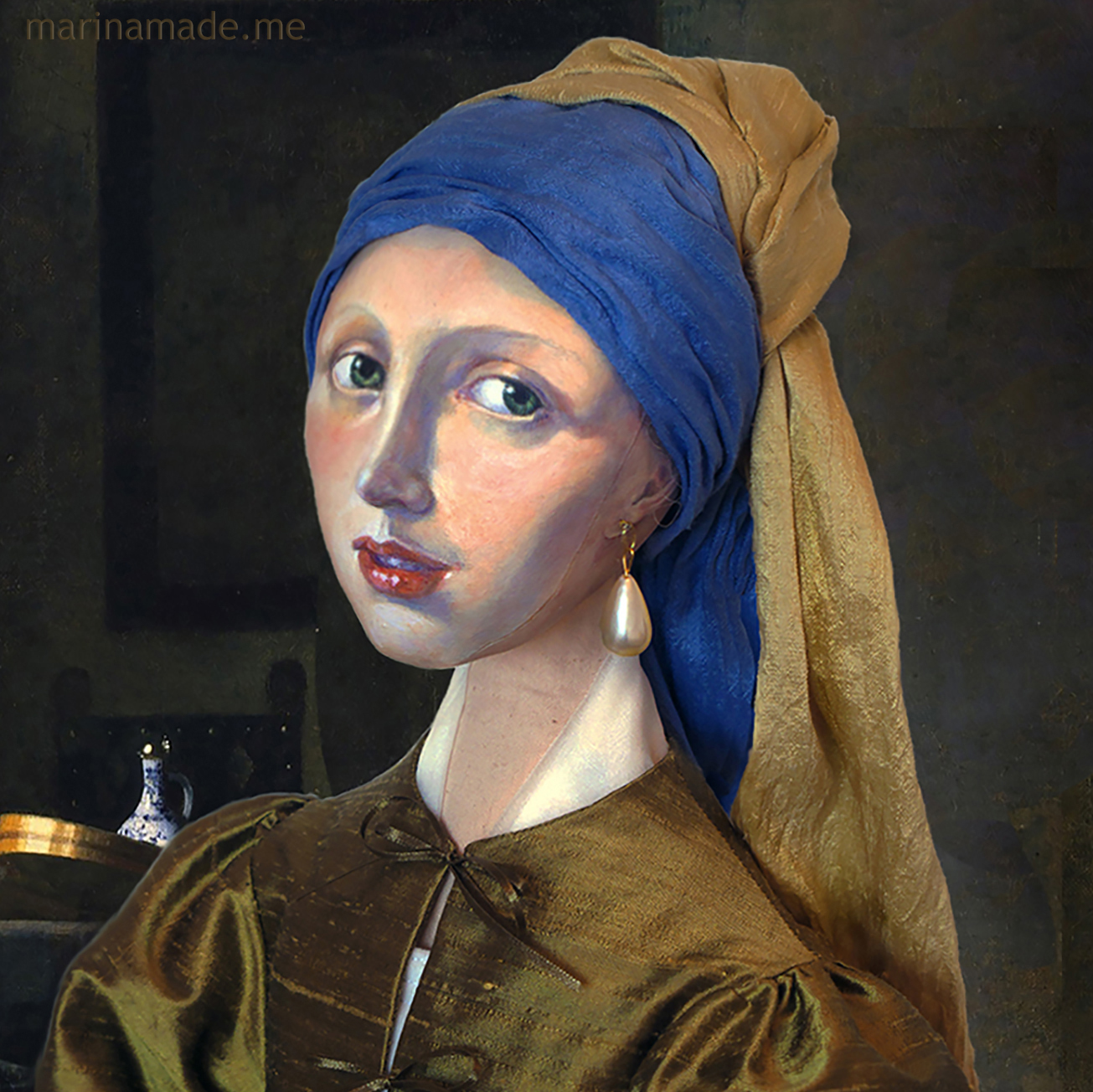 The Girl with a Pearl Earring

Vermeer’s painting ‘Girl with a Pearl Earring’ is probably one of the world’s most recognised and famous image of a woman.

I have chosen her to feature as one of my muses because of the mystery and paradox surrounding the girl behind the mesmerising gaze. 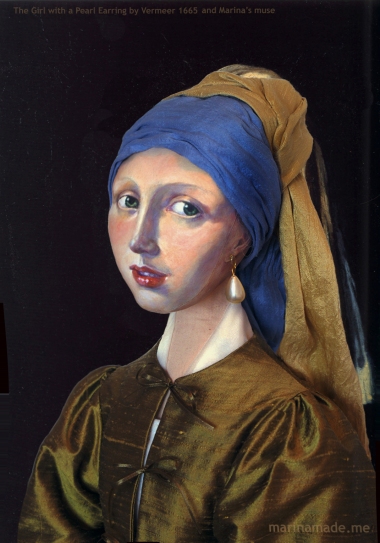 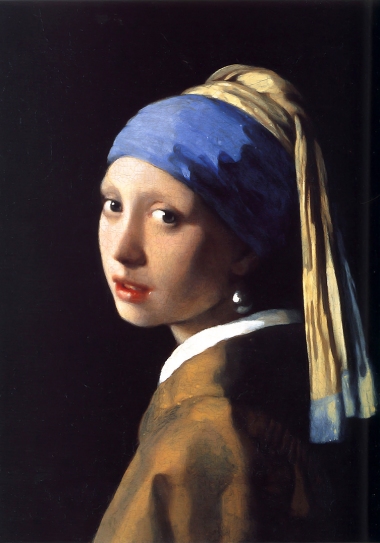 The ‘Girl with a Pearl Earring’ is recognised universally as one of Johannes Vermeer’s undisputed masterpieces. Painted in 1665 during the “Dutch Golden Age”, Vermeer’s muse poses simply against a dark undefined background, dressed in a costume that is not specific to any particular culture, wearing a turban-like scarf on her head and a single giant pearl earring. Looking over her shoulder she stares directly out at us with an alluring, almost playful, yet enigmatic gaze.

Could it be possible that her expression is one of unrequited love? Looking over her shoulder with seductive eyes and slightly parted lips.

Or is this the innocent doe-eyed look of a comfortably close family member? His daughter maybe ? 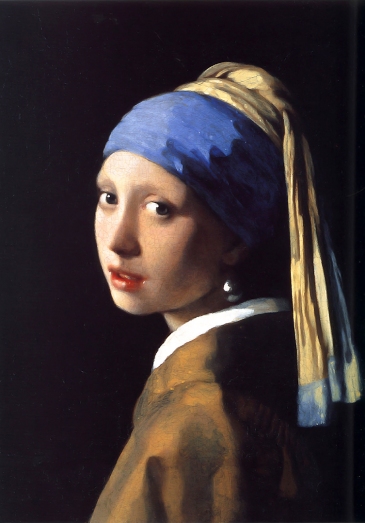 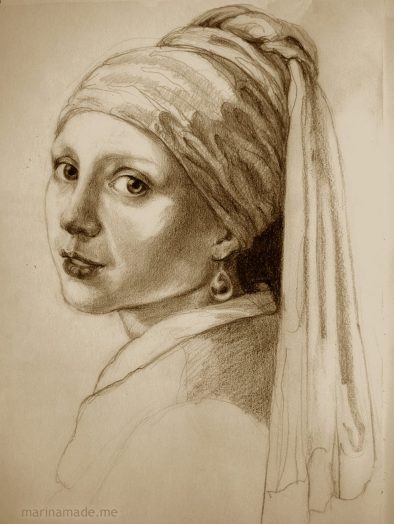 Preparatory sketch for ‘Girl with a Pearl Earring’ muse, pencil on paper by Marina Elphick. It is useful to get to know the face by drawing before I work in colour on a three dimensional surface.

The identity of his sitter and her relationship to Vermeer have been speculated upon for over a hundred years, but due to lack of any evidence her identity remains uncertain.

This air of mystery contributes to her enduring and beguiling appeal.

Vermeer and his Women

Vermeer specialised in domestic genre painting, fashionable in 17th century Netherlands, so women featured to a large extent in his work. Attitudes towards women at that time were remarkably positive, they had legal rights and enjoyed a certain amount of equality with men, which was a rarity in Europe. The flourishing economy led to better education and allowed women new respect and prominence in public life, some were capable entrepreneurs and business women. 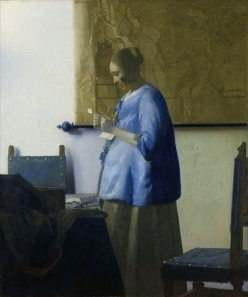 Woman reading a letter, by Johannes Vermeer circa 1662-1663. The woman is thought to be Vermeer’s pregnant wife. 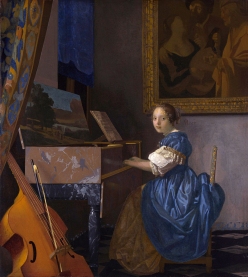 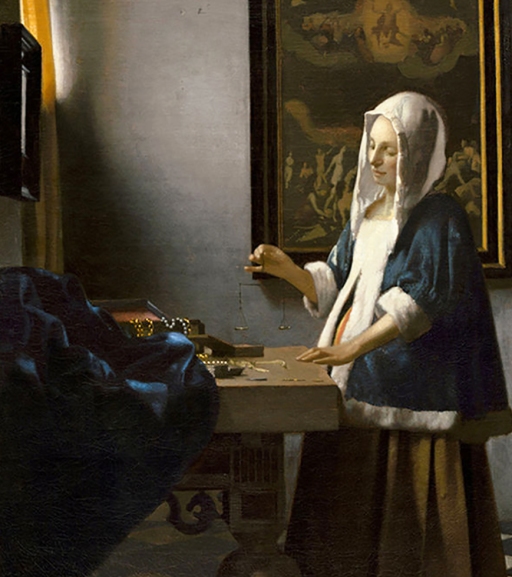 Woman Holding a Balance, painted by Johannes Vermeer, Circa 1664.

Vermeer’s paintings of home life were rich in moral allegory, his subjects often seen engaged in work or practical activity. Women’s domestic work was seen as a virtue and central to Dutch life, as well as the basis of stability and prosperity for the nation.

Johannes Vermeer, who was born in Delft in 1632 ranks as one of the great Dutch masters admired alongside Rembrandt and Frans Hals. He was among the most successful artists working in the city of Delft during the 17th century. 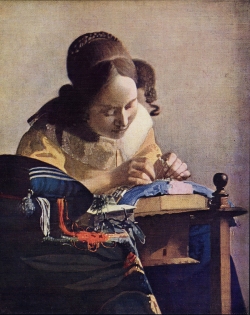 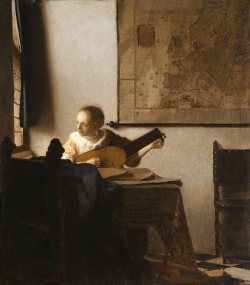 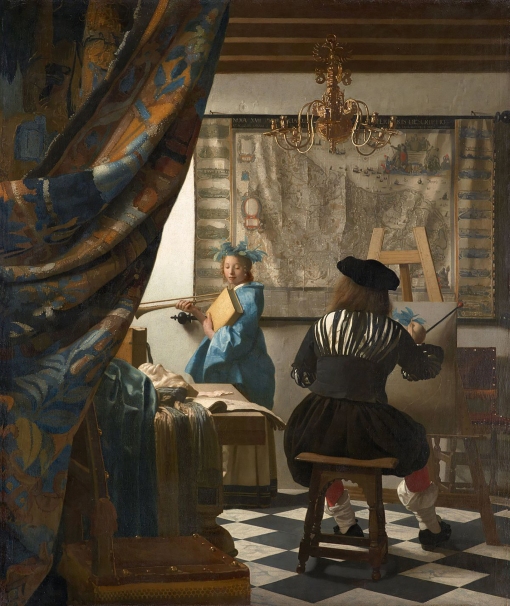 Vermeer is thought to be self trained. He would have had access to various artists via his fathers business as an art dealer, which may have informed his developing talent and assisted in refining his skills. However his ability to capture the qualities of light and calm in domestic interior scenes was unique.

In 1653 Vermeer married Catharina Bolnes, the daughter of a wealthy divorcée and he converted to Catholicism. He moved into his mother-in-law’s large house in the centre of Delft where he had a north facing studio on the second floor. His wife gave birth to 15 children (11 survived infancy) which was quite an achievement in 17th century Holland when 4-8 births were more usual and of those only 2 would reach adulthood.

During his lifetime Vermeer was devoted exclusively to his art, living out his life in the studio at his home in Delft, where he earned a reasonable living as a painter and art dealer. Vermeer painted slowly and with great care, he frequently used very expensive pigments, including the blue semi precious stone Lapis Lazuli used for the turban in the ‘Girl with a Pearl Earring’.

He didn’t wish to pay for professional models with his large family to raise and household to keep, he didn’t need them as he lived in a house full of people. It is known that his wife Catharina modelled for him as did her mother, his 3 eldest daughters, the maid and his friends. With eleven daughters he was surrounded by women. During his short career his paintings commanded high prices so he was able to support his family and send all the children to school.

Unfortunately the good life was not to last for Vermeer and his family. There was a severe economic downturn in 1672 due to the Dutch war, making Vermeer’s latter years miserable. It is known that bread became the staple diet for the Vermeer family in the lean period (1672 to 1675) and one baker accepted Vermeer’s paintings instead of the money owed him. After a period of depression and a short illness sadly in 1675 Vermeer died aged only 43 and left his wife and 11 children with debts to pay off.

Vermeer remained in relative obscurity until the end of the nineteenth century. This may have been because his output was small, he produced only 50-60 paintings, of which just 36 are universally attributed to him.

Vermeer’s painting, ‘Girl with a Pearl Earring’ stands out from his other paintings by its lack of framework or narrative references. Unencumbered by symbolism the girl looks directly and openly at the viewer, unlike most of his other women who are are looking away, busy at a task or playing a musical instrument.

The ‘Girl with a Pearl Earring’  has an ambient timelessness and resonates with a more “contemporary snapshot aesthetic”.  Margaret Carrigan

Some art historians argue that the painting was not meant to be a portrait, it was a “tronie” meaning “visage” or face.

A tronie was traditionally part of a popular, but now forgotten genre of 17th century dutch painting, where the figure was not intended to depict an identifiable person, instead it portrayed a character as an archetype. 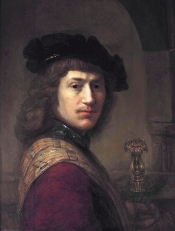 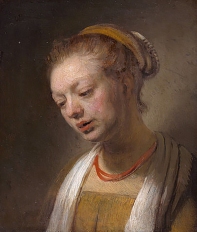 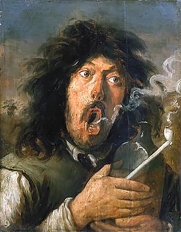 Joos van Craesbeeck’s ‘The Smoker’ 1635, an example of a tronie. 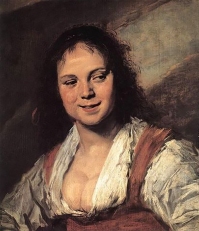 In portrait form it would concentrate on facial expression, often exaggerated, but when the model was dressed in an exotic costume, a tronie may have been based on studies from life and real features.

It is clear however that Vermeer painted actual people, not idealised faces or caricatures, his painting of the Milkmaid show his maid Tanneke Everpoel in robust and detailed form, (below right). 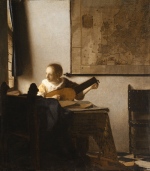 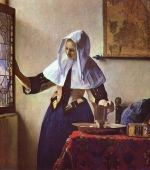 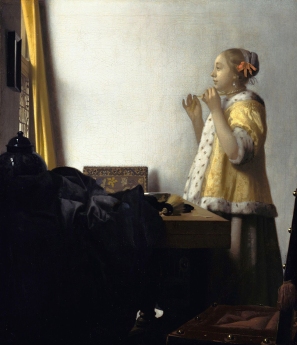 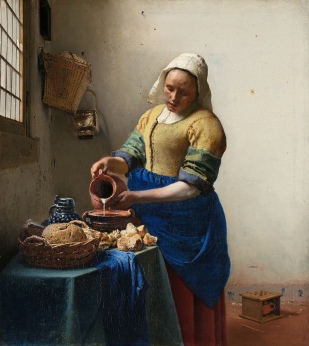 The Milkmaid by Johannes Vermeer, c 1658-1661. She has been identified as Tanneke Everpoel

Most likely contenders for Vermeer’s unknown muse in The ‘Girl with a Pearl Earring’ are: Maria Vermeer, his eldest daughter; Magdalena Van Ruijven, the only daughter of Vermeer’s patron and Griet, a maid.

Vermeer’s eldest daughter Maria would have been aged twelve at time of painting and is the most likely of the sisters to have modelled for him.

The Renaissance specialist Benjamin Binstock has suggested that Maria may have been more than just the model to ‘Girl with a Pearl Earring’, she might also have assisted her father in his studio, becoming a gifted artist in her own right, later going on to paint about one fifth of the art works currently assigned to her father, those thought to be ‘misfits’, of a lesser finish or different style.

These include Mistress and Maid, Girl With a Red Hat, and Girl with a Flute, two of which are illustrated below. Interestingly each of these paintings include a model wearing a pearl earring.  Other art historians dispute this of course.

Girl with a Red Hat 1665-6, possibly a Vermeer but the attribution to Vermeer has been questioned and it has even been suggested that this painting might have been carried out by his daughter, Maria Vermeer. 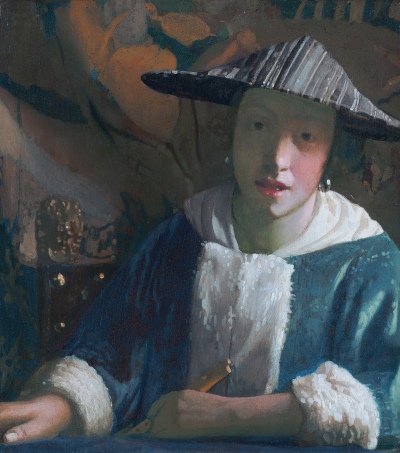 Girl with a flute (c1665-1670) the attribution to Vermeer has been diputed. There have been suggestions that this painting could be a self portrait by Maria Vermeer.

Magdalena Van Ruijven was the only daughter of Vermeer’s wealthy patron, Pieter Van Ruijven and was a similar age to Maria, twelve or thirteen. The Van Ruijven and the Vermeer families were near neighbours in Delft, therefore it is possible to imagine a portrait having been commissioned. However the conservative style of portraiture in the 17th century would have expected to portray the sitter with pride and a projection of their social status, so it is unlikely that Van Ruijven would have wished his own daughter to be portrayed in unconventional dress, gazing wistfully, without even a hint of her elevated social position. 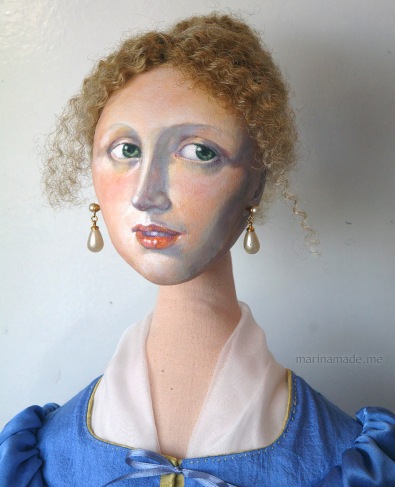 Girl in blue without her turban, muse detail, by Marina Elphick. 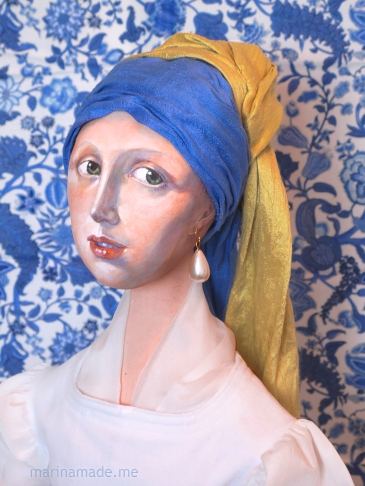 Griet was the family maid portrayed in Tracy Chevalier’s 1999 historical novel / love story between Vermeer and a servant girl. In 2004, Chevalier’s book was adapted into an acclaimed feature film directed by Peter Webber, staring Colin Firth as Vermeer and Scarlett Johansson as Griet, the young woman who becomes Vermeer’s muse and obsession.

The story is compelling and the film is exquisite, suppressed sex and jealousy keep the tension running high, but the story is not based on any historical facts, it is just beautifully written fiction.

Chevalier’s version of Catharina Vermeer as a cold and bitter antagonist is totally at odds with scholarly accounts and opinion. Archival documents suggest they were a finely matched couple, they had 15 children, although four did not survive infancy. The fact that Vermeer gave up his family religion to marry his Catholic wife also suggests that it was love which attracted the pair, romantic love was not unheard of in 1650s Holland.

Journalist and author Simon Jenkins has been openly critical of the negative portrayal of Vermeer and his wife in the novel and film, saying, ”there is not a shred of evidence that Johannes and Catharina were unhappily married.”

He argues that the negative images of Catharina and Johannes Vermeer “are doomed to be forever fixed in the public imagination as the ‘true’ Mr and Mrs Vermeer.”

If this turns out to be the case, an historical injustice will have been dealt to them both. Simon Jenkins firmly believes that Vermeer’s eldest daughter, Maria, posed for the ‘Girl with The Pearl Earring’ masterpiece.

Art critics are convinced that Vermeer’s wife Catharina posed for various paintings and it would seem logical that the artist painted the people and themes he most loved, including his children, family, friends and home. 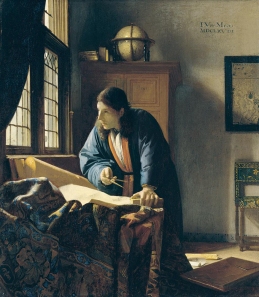 The Geographer, painted by Johannes Vermeer, 1669. 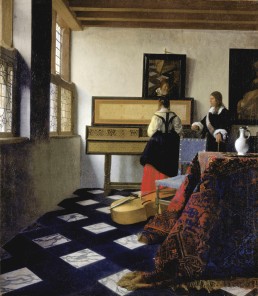 A Lady at the Virginal with a Gentleman, Vermeer 1662-5 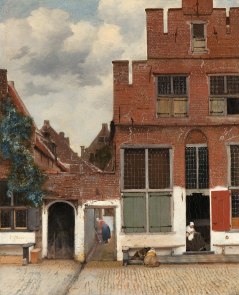 Vermeer’s acclaimed ‘Girl with a Pearl Earring’ has captured the imagination in a similar way to Leonardo da Vinci’s ‘Mona Lisa’; through the questions it poses and then leaves unanswered. Interestingly the painting is often referred to as the “Dutch Mona Lisa”, or the “Mona Lisa of the North.”

The identity of the young model gazing out at us from the painting remains a mystery and maybe we are not meant to know her name. Vermeer, if he so wished, could have easily left some clue. Even the distinguishing pearl only appeared in the title the mid twentieth-century, before that the painting had been known as “Girl with a Turban” or “Young Girl” 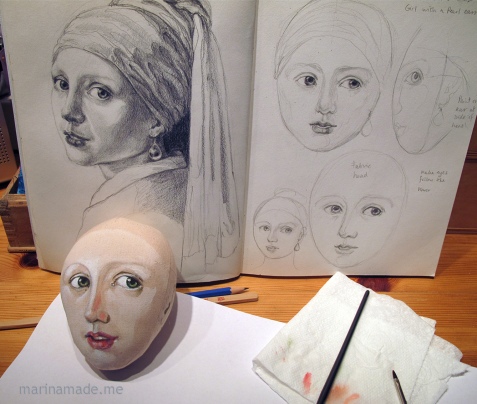 Underpainting of girl’s head, using scaled up drawings as reference. 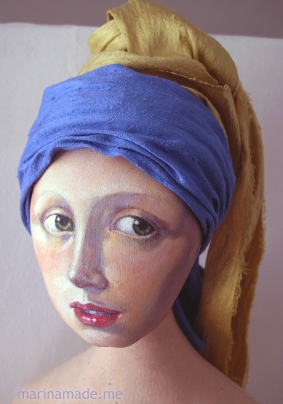 Early stages of painting the face and experimenting with silk scarf to make her turban. 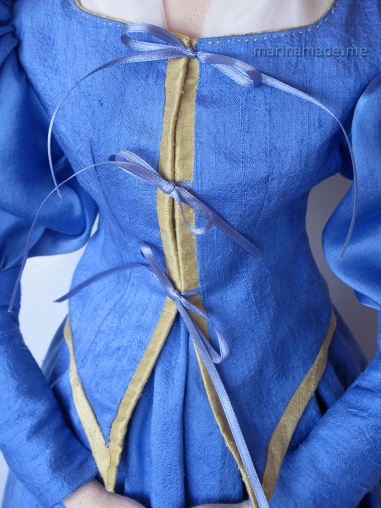 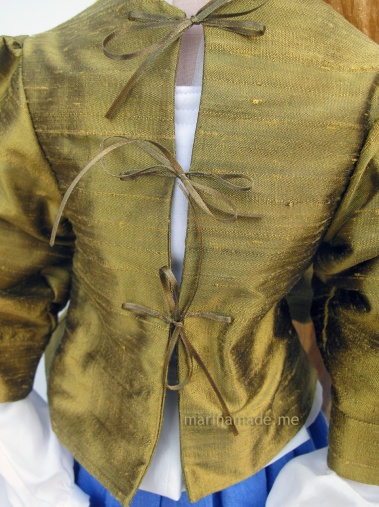 Benjamin Binstock: Who Was the Girl With the Pearl Earring?

Simon Jenkins, Guardian: Vermeer was no sex-mad garret artist. The scribblers have got the wrong girl

4 thoughts on “Vermeer’s Girl with a Pearl Earring, his Mystery Muse”